These are too awesome for words, glad a pic is worth a thousand of em!
See the original BuzzFeed post HERE. 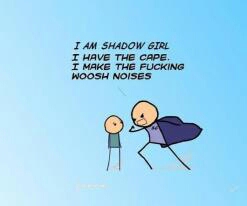 After taking a brief sabbatical from Ted Dead to pursue untold avenues, I’m excited to announce that Cal is back, and with the help of the Revengers, ready to save the world from false prophets and Hollyweird’s Z-Day propaganda. But first, he has to save Ted from the evil clutches of the Brangelina Beast!

To review the old and catch up on the new storyline, beginning with ‘[The Return Of] Ted Dead, Just Your Everyday Zombie #1. World War Zzzzzzzz…’ be sure to check him out on www.TedDead.com and on Ted’s newest format at ZombieFans.com.

See those page tabs up there on the top? (and the handy links on the right —->)
Be sure to keep up with my adventures as Shadow Girl (as featured in Ted Dead) by checking The SG Page often!
Share this post to help spread the news that Ted Dead Is BACK!
New buttons have been added just below each post to make sharing even easier!
Facebook, Twitter, Tumblr, Pintrest, StumbleUpon, LinkedIn, and Reddit buttons are now available. You can also share with your Google+ circles, and PressThis right here on WP!
P, L, & N ❤
xxoo