When newly weds Jason and Emily moved into their first home together they thought they had the perfect start to their new life together; a quiet house in the middle of the country away from the hustle and bustle of everyday city life.
Unfortunately for them, things take a supernatural turn when they realise the house isn’t quite as empty as they first believed it to be.

The book starts with an idealistic summer backdrop; idealistic if you don’t pay attention to the food burning on the grill, or the huge puddle of blood drying on the pavement. I knew I was in for a ride when I had tears in my eyes at the end of the first chapter.
Fast forward in time a bit to meet Jason & Emily. Newlyweds who put off their honeymoon to purchase their dream home. They arrive, with their dog Roald, just before the moving truck. (Fun Fact: Notice the dogs name? – Leave me a comment if you get it.) We notice strange happenings before they’re even moved in. Once they are, Roald picks up on something – like all pets are known to do.


Jason begins to take notice when doors in the house start slamming closed, but he can’t find the source of a draft no matter how hard he looks.
To weird him out a little more, he gets a surprise visit from Aimee, a strange woman who claims to have once lived in his house. He thinks she looks looney, but, her husband, Ian, comes to collect her – promising it will never happen again. He tells Emily about it, and gets her properly bugged, too. (This bit plants a seed for our minds to silently cultivate while we continue reading.)
While laying in bed with Em that night, having a tiff about how unproductive his days are while she’s off at work, they hear a commotion coming from downstairs. He goes to investigate & finds one of the boxes he neglected to unpack had fallen over, spilling it’s contents onto the floor. He returns to bed, leaving the mess until morning, (and further irritating his wife). The next morning, when Em thanks him for picking up, and knowing he did no such thing, Jason starts to freak out. Could that woman have returned in the night? Is she here now? Roald, you didn’t do this, did ya? (To which he replies O.o – then licks his butt).
By the time Emily gets home from work, Jason has it all figured out. They are sharing their home with the ghost of an eight year old boy, Josh Tomsett, the son of the houses previous owners.
In my best Steffon character voice…

“This book has everything! Ouija boards, surprises, heartbreak, and twists… That thing from the movie Poltergiest where the living play games with the ghost in the kitchen!”
This is another of those stories that dragged my emotions through the ringer. I laughed out loud, cried, got angry, got scared… And, as it always happens to me, during one key moment towards the end… great big huge scary noise from the other room! (Upon investigation, it was the ‘shower caddy’, the thing holding all the shampoos and soaps, it fell right off the side of the shower at a perfect moment. It’s strange how things like that happen!
The only other thing I’ll say is this – we’re in Matt’s world, there are no happy endings.

* The Lost Son also includes a bonus story from the recently published collection SHORTS, titled AS I LAY STILL

EASTER EGGS!!
I’m a closet geek. Well, as I like to say… geek by day, nerd by night!
In geek speak, an easter egg is a secret message, credit or screen hidden in an application, game, or DVD. Easter eggs typically include a bonus feature or item but can include the names of the developers responsible for the application, extra levels, or bonus content.
Even though the term brings to mind electronic bonus material, I use it for literary bonus material. Those hidden gems authors slip in once in awhile. Matt is famous for them. I try to point out a couple of my favourites from every story, without spoiling things. A couple Easter Eggs in THE LOST SON…

Remember me pointing out the name of the dog?
Roald. I won’t ruin what I said earlier, if you ‘get it’, leave a note in the comments. Need a hint? Read my interview LOW TEA WITH MATT SHAW.

JOSH TOMSETT, our lead ghost in this story, borrows his name from our friend Kim Tomsett, (aka wistfulskimmie)! I’m sure you’ve seen her reviews on Amazon, or chatted with her on Matt’s Facebook wall.
I think it is really cool that Matt interacts and includes his fans throughout his writing process.

At one point, Emily, (while trying to get in touch with Ian Tomsett), was put on the spot when asked for her name. In a pinch, she uses the name Nurse Ratched, (made me laff!!). In case you can’t place the name, Nurse Ratched is the antagonist in the 1962 Ken Kesey novel “One Flew Over the Cuckoo’s Nest” and in the 1975 movie of the same title. The overbearing, cruel, perfectionist nurse rules the asylum in the story with an iron fist.
Any book nerd like me has called at least one nurse by this name in their lifetime!! Used creatively, you can turn it into an insult on almost anyone!

I received an early copy of GIVING UP THE GHOST from Dan in February. Right when I started it, my dad died. I read it on the plane, going to the funeral. I know this might sound strange to most of you, but, this story helped me get through the next few days! I took much comfort in it. Odd place to find peace, in a horror novel, but I did! The story is excellent! I cried, I laughed out loud, I got angry… I fell in love with these characters. 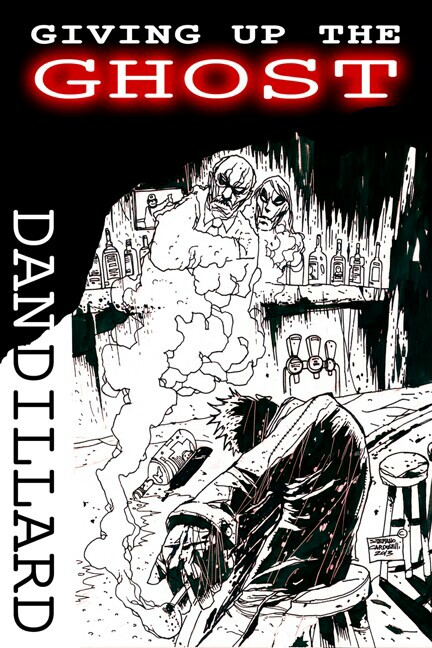 Gerry Sheffield is a real piece of work. Can’t keep a job, can’t stay any sort of sober, and he has always relied on his parents to bail him out of the trouble he can’t seem to keep himself out of. A grown man who won’t take responsibility.
After a particularly nasty bender, and a run-in with his landlord, Gerry is calling his parents, again – not asking for help as much as demanding their help. After all, they are his parents. It’s their job to look out for their son.
His parents, Margo & Bill, are at the end of their rope.
They’d always tried to help their son. The college tuition that was wasted, the car repairs, the down payment on his now ex-wife’s house, everything. They’re out of patience, and they’re almost out of means. After 27 years, they decide – no more. Clean up your self, clean up your act, put on your big-boy pants & cowboy the fuck up.
The following morning, Gerry gets two checks.
One is for his rent & a thousand bucks for the month.
The second… a great big really check from his dad.
This is it. No more. Sink or swim.
Gerry actually makes a whole-hearted attempt, one last shot to make something of his life, to make his father proud! But, within a day, any chance of walking the straight & narrow is blown. He’s actually made things far worse!
Self righteousness mixed with self pity doesn’t make a good combination. So, once again convincing himself that his problems are all because of someone else, Gerry’s anger helps propel him into calling his parents, to blame Bill & Margo for every single thing that has ever gone wrong in his entire miserable existence. It is bad. He finally says the things that make his parents turn their backs, close their hearts and lock him out. He’s gone too far this time. Realizing what he has done, Gerry’ s hurt eventually gives itself over to hate. And, Gerry lands himself in jail. Again.

Read GIVING UP THE GHOST to find out how far Bill & Margo willing to go to get Gerry to change his ways.
After death, is there anything they won’t do?

Visit with, check up on, chat with and stalk –
Facebook
Amazon
Goodreads
Demon Author