Who is Tonia Brown?
That’s not an easy question to answer.

She is one of my very favorite authors, and she’s among the top writers in the zombie genre. Her unique recipe mixes zombies, horror, humor, & erotica together, to produce the most original and enjoyable stories I’ve ever read. She has created characters that you will either love, or love to hate. Whichever one, they’re characters you want to spend time with. I always get mournful when I finish, because I’m never ready to part ways with them.

Tonia’s short stories have appeared in a variety of anthologies. She’d cranked out several books, including Lucky Stiff: Memoirs of an Undead Lover, Badass Zombie Road Trip and the erotic steampunk series Clockworks and Corsets. She lives in North Carolina with her genius husband of many years, Tony. She likes coffee & fudgesicles, though not always together. She shares her home with an ever fluctuating number of moody cats, and she shares her likness with her identical twin sister. When not writing, she raises unicorns and fights crime with her husband under the code names Dr. Weird and his sexy sidekick Butternut.(Guess which one she is.)

Tonia was cool enough to come hang out in my pillow fort for a little while, long enough to enjoy a cup of coffee, and answer a few questions… the first one being “How do you like your coffee?” To which she replied, “I like my coffee like I like my men. Ground up and in the freezer.” This is going to be fun!

BBB: If you could live one day as one of your characters, who would you be?
TB: Lelanea Dittmeyer from the Railroad! series. She is so beautiful and brave and in total control. I wished I was as strong as her. Plus,she is a werewolf, so there is that.

BBB: How do you react to bad reviews?
TB: I usually shrug and get back to my life without a clue as to what went wrong. Bad reviews rarely say what they thought was wrong with the book beyond the fact that they ‘didn’t like it.’ I had a one star reviewer claim the characters of Railroad! were shallow and he just didn’t care what happened next. Now that I know is just silly! At those times I sigh and move along. Not every story is for everyone.

BBB: I know you have another job. Would you like to say anything about it?
TB: I work ten hour nights, four days a week as a receptionist in an emergency department of a small hospital. I am the one that collects the information, and complaints. And I don’t just mean the ‘why are you here tonight’ complaints. I mean ALL of the complaints.

BBB: Have you ever used a work experience in a story?
TB: Nope. I try to make a point of not mixing that job and this. I recently wrote a ghost tale set in a hospital, but those kinds of stories are few and far between for me. I do however parlay my medical familiarity into the written word. For example, I have an understanding of a variety of injuries from first hand experience. It is easier to write about a gushing knife wound when you see them up close and personal over and over.

BBB: Do you have a favorite author?
TB: Neil Gaiman. Hands down I love his work the best. Terry Pratchett is a very close second, with Tim Robbins and Stephen King coming alongside.

BBB: What will you name your Autobiography?
TB: She Meant Well

BBB: What is your most listened to background music while working?
TB: Classic rock. Either that, or Vivaldi.

BBB: Name your computer/laptop.
TB: The laptop I’m writing on now is called ‘Lappy’. And, I have a notebook we call ‘Tiny Laptop’. My cell phone is called ‘Tiniest Laptop’.

BBB: What’s your sign?
TB: Libra. I can never make up my mind and I always try to please all parties involved. It’s very tiring being a Libra.

Thong or bikini? On me? Neither. I need as much cloth as I can to cover my wide load.

Top or bottom? TOP, FOR SURE! RIDE ‘EM COWGIRL!

Where’s Waldo?
I’m not sure. Last time he phoned, my caller ID said ‘location unknown’. I suspect he was at a wharf because I could hear the fog horns in the background. He told me to forget about him and everything we shared over the last six months. I couldn’t believe he would just cut me out of his life like that, but with the Mob after him and all, I understand it was fir the best. Besides, I don’t think I really loved him. I think it was always about the sex. I just hope he finds whatever it is that keeps him wandering around so dammed much.

The cat has started pawing at the couch cushions, and things are starting to look a little too ‘London Bridges’ for my comfort. Are you still wanting to know her a little better?
Have a question about undead sex? Curious how a just handful of women can run a whole airship and look great doing it? Wanna learn the ins and outs of skinning zombies?
You can send your questions, praise, undying love, and gifts of cash, to her at thebackseatwriter@gmail.com.

Take a peek at Tonia’s Author Page on Amazon.com –

See who she enjoys reading while you’re looking her books up on Goodreads –
http://www.goodreads.com/author/show/3160763.Tonia_Brown
and Smashwords –
http://www.smashwords.com/profile/view/toniabrownBA

Get to know her on a more personal level by stalking her Facebook Page –
http://www.facebook.com/backseatwriter?ref=ts&fref=t

And finally, enter the world of All Things Tonia by subscribing to her blog – The Backseat Writer –
http://thebackseatwriter.blogspot.com/ 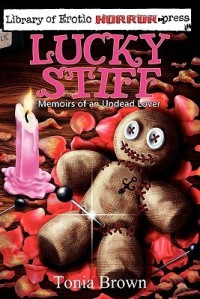 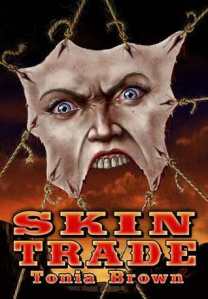 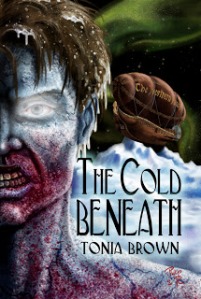 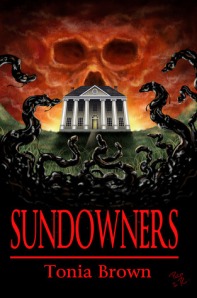 Letters From The Dead – Rebecca

Check out my review of LUCKY STIFF: MEMOIRS OF AN UNDEAD LOVER in COVER TO COVER!
https://beckisbookblog.wordpress.com/2013/03/16/lucky-stiff-memoirs-of-an-undead-lover-by-tonia-brown/

Thanks so much for having me on! I had super fun and hope folks did too.

Loved the interview and looking forward to pore over..Hope the pages are waxy in nature so as not to stain easily.

Each page treated with Gortex, guaranteed to stay dry.
Go ahead … get messy!

Thank you so much ♥ I am putting a lot of heart & soul into this blog, it means a lot to hear you say you like it!

Thank you for introducing us to Tonia Brown! I thoroughly enjoyed her response to the interview questions (good questions by the way!) – love her sense of humor and play on words…I imagine her books to be similar in style – witty, wicked, and wonderfully entertaining!

Thank you so much, Bev!
She is all three!
Follow her blog (link above) to keep up with her latest works, and be notified of sales, freebies, and contests. Her sense of humor kills me ♥

I was just reading another interview that Tonia did, ( http://writersparty.com/2012/08/10/authorinterviewtoniabrown/ ), where she was asked “Do you have a favorite quote?” To which she replied…
• “I don’t want to achieve immortality through my work… I want to achieve it through not dying.” ~Woody Allen
I like that!