This novelette is a perfect example of why I started BBB, and why I’m so passionate about supporting indie writers. It also reminds me that I need to thank the person who invented the e-reader, because without my Kindle I would have never found all the amazing books that I’ve read, or met the talent & hearts behind the writing.
(My awesome idea to thank the inventor of the e-reader is posted at the bottom).

OF LONE HEADSTONES combines all 4 verses of the previously published Headstone Sonata, and is the first volume in a series written by new-to-me author Jorge Bocanegra.

“What’s worse, the monsters crawling out of their graves or the ones that we can’t keep buried in our minds?

Joel has long been a victim to the viscous teeth of the assumptions and misconceptions conjured in his own mind concerning his relationship with his girlfriend, Alex. After three years together, things just haven’t been the same. But now, those monstrous doubts in his head will become personified in the form of risen corpses in the city of Orchard.

Will Joel and Alex be able to put aside their differences and survive together? Or will this apocalyptic event spell the perfect opportunity for the couple to go their separate ways?” 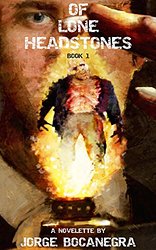 OF LONE HEADSTONES chronicles Joel’s experiences during the beginning of the zombie apocalypse. Surrounded by monsters, each new obstacle he faces triggers inner demons that he has to fight, making survival doubly difficult.
This is a very emotional story.  I had tears in my eyes more than once, feeling literal heart-ache for the characters. There is a scene where Joel finds a boy (named Jorge) hiding from the zombies in a bathroom stall, and that encounter broke my heart in 27 different ways.
I can’t say if these situations are written from a deeply raw & painful place, or if Jorge is just a kick ass writer, but it’s definitely a hard journey to take, and I can’t wait to read more!

I’ll be reading this whole series, so plan on hearing more about Joel.

2 replies on “OF LONE HEADSTONES [Book One] by Jorge Bocanegra”

Reblogged this on Book Reviews and Author Interviews.