“What a cruel injustice that Stephen King’s Just After Sunset won the Bram Stoker Award for Best Collection while Gleefully Macabre Tales was merely a finalist! Does King’s collection have an awesome wiener dog story? I think not!”

GLEEFULLY MACABRE TALES includes 33 of Jeff Strand’s most twisted blends of cringe-worthy horror and ghoulish humor, (with a couple of serious pieces thrown in just to mess with you).

If you’re looking to laugh, gasp, gag, or do all three at the same time, making sort of a weird sound that hurts your lungs and elicits odd glances from nearby pedestrians, this is the book for you!

Really, Really Ferocious:
A grumpy old man means business when he says ‘No Solicitors’! HILARIOUS! And, it includes this statement…
“OK, stop poking me with the dog.”

Socially Awkward Moments With An Aspiring Lunatic:
Sanity is miserable, and boring. Being insane sounds like much more fun – especially the maniacal giggle. But, how does one become insane?

High Stakes:
The odds are in your favor, you’d be crazy not to try again!

Special Features:
Do you watch the extras on your DVD’s?
For me, it depends on the movie, and if I’m too tired to get up to turn off the DVD player. (#FF – Kevin Smith & Judd Apatow have great special features.)
This ss is the ‘watch with director commentary’ option of a snuff film.

Sex Potion #147:
Always follow specific instructions when ingesting potions from a gypsy – you could end up in a very uncomfortable place…

The Three Little Pigs:
The fairy-tale trio has a bloodier time of things in this re-telling of an old favorite.

Everything Has a Purpose:
Everything. I have a funny comment to make, but it would be a spoiler.

Them Old West Mutations:
Freaks of nature, or scientific discovery? This one might bug you a little bit.

Wasting Grandpa:
If you want to end the life of a family member, do a little research first. Make sure they’re not as spunky as they once were, and be ready for the unexpected!

A Bite For a Bite:
A pissing contest between bros gets serious rather quickly.

Glimpses:
Very good short, written in a different kind of style. The story of a couple’s relationship, told through brief glimpses into the important aspects of their lives.

Common Sense:
If we all listened to our inner voices, the world would be a very boring place.

Gross-Out!:
Two of Jeff’s entries in the World Horror Convention gross-out contest.
I don’t know who Cullen Bunn is, but I HAVE to find out!

Bad Coffee:
Richard fights with his terrible cup of coffee, hilarity ensues. I giggled out loud reading this.

An Admittedly Pointless But Mercifully Brief Story With Aliens In It:
Another hilariously funny short, with aliens!

Roasting Weenies By Hellfire:
Charlie is a rotten kid. And since writers can dispense ultimate justice, Charlie finds himself in Hell. Even Satan hates whiners, but he does give Charlie a second chance. He sends Charlie back up so he can play a practical joke on someone else the Devil has his eye on. What transpires is a hilariously gory, Jeff Strand version of HOME ALONE.

Quite a Mess:
Don’t play with your food! 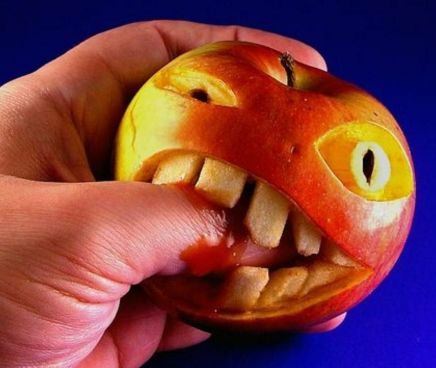 I Hold the Stick:

Scarecrow’s Discovery:
Grumpy old man, Ray, has had it up to HERE with them damn fool kids tearing apart his scarecrows every night!

Howard, the Tenth Reindeer/Howard Rises Again:
This one started life as a Christmas card – it’s true!
Worth reading if only for the toys – Jeff’s version on Tickle Me Elmo being so wrong that it’s perfect!

BrainBugs:
The bugs in my brain are making me crazy! Will you help me get them out? Wait! They’re my friends, though.

Cap’n Hank’s Five Alarm Nuclear Lava Wings:
Vincent is a loud-mouthed braggard, and he annoys everyone when he comes into Bernard’s restaurant. He has yelled ‘these wings are for pussys!’ one too many times. So, the boys are going to show him hot wings. And, that Bernie doesn’t take too kindly to customers bad mouthing his food.

A Call For Mr. Potty-Mouth:
A new boogeyman for the kiddies! Too bad my son is too grown up to believe this – it would have come in very handy in my house.

The Bad Man in the Blue House:
Very creepy, and the style adds to the chill factor.

Abbey’s Shriek:
This one is a bit longer, and no comedy here. It’s actually a bit disturbing. A single father, with two kids, tries to keep his demons hidden. But, it might be time for his son to learn about their terrible ‘curse’. Nope, not a werewolf. A real, human monster.

The Socket:
Quincy lost his eyeball in horrifying detail – have I told you that eyeball stuff makes me really squeamish? ::shudders::
Well, I think some of his brain goo leaked out of his eye hole, cuz Quincy is a right loon now!

One of Them:
A young boy visits the freak show at a local carnival, but they may not be as different as he’d hoped.
I’ve had the Social Distortion song ‘Down Here With The Rest of Us’ going through my head all day, and now – it fits perfectly here! Hmmm O.o

Secret Message:
A hint about this short story…
Harvey frowned as he opened the envelope. Pure gibberish. What was this, a code?

The Bad Candy House:
Jeff might slowly be turning into a grumpy old man!
‘Get off my lawn, you hooligans!’
The man in this short story is fed up with those damn fool kids tricking him every Halloween. This year – payback!

A special demented bonus from Jeff! The novella-
Disposal:
Frank is a small time criminal. Robbing places for pocket change isn’t paying his bills, so he takes his chances in the Murder For Hire business. It’s not as easy as he thinks!

Jack, this guy has made it into my Favorite Authors list – for sure.
It’s the dark humor – I have a soft spot for snarky psychopaths!

If you haven’t checked out Kindle Unlimited, you should. I think it’s more than worth it, and the authors are getting paid.
I need to check if I can just get it on and off, like August – yes, September – no, December – Big Yes…
🙂