THE DEAD NATIONS’ ARMY
DNA: Code Flesh
Part 1
War Within The War
between the Flesh
By Alan Dale 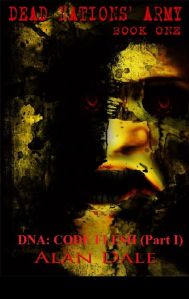 A great story, touching all aspects of all our lives – love, hate, life, death, family, laughter, war, government, friendships, sexuality, money, ethics… The characters are ones you can relate to, and I’m sure everyone who reads this will find a character that resembles themselves in more ways than one. I found some dark chuckles along the way, too. It’s a story that (in some ways) could happen, and that’s the kind of stroy that causes some sleepless nights. Unlike some Apocalypse theories, a lot of thought went into explaining the Hows & Whys of the ‘infection’. Some stories give very vague explinations of why the dead are returning, if any explination at all. DNA: Code Flesh is not like other stories, detailing the planning, the making, and the execution of the ‘Bug’, along with how it spreads and what could happen if plans went wrong, making the story more plausible, and therefore – even more frightening.

One thing that got to me was the way the author described how the government started conditioning the public very early on -brainwashing citizens from even BEFORE the very beginning (if that makes sense to you) – so that when the entire world is one populace to be governed by the NWO, and when (not if) the SHTF, people were ‘educated’ to submit and comply to all the governments ‘requests’. Failure to submit to these requests ends with monitary penalties and/or jail time – and in the time of the NWO – jail is NOT a place you want to end up.

It makes you think… When you are forced to choose a side, where will your loyalties lie? Will you choose to follow your head or your heart? Will you turn your back on your family, friiends, and your own morals – just because you’re afraid that those things will land you on the losing side?

Overall, I enjoyed reading this. I had a couple moments of confusion in the story, but nothing that made me miss any major plot points. At times, I felt strong emotions – and to me, that is what makes a good story. One that pulls me in enough to feel pissed off at the bad guys, or make my heart beat faster during the action… and even mushy when those stolen moments happen during a time when that is the last thing on your mind.

2 replies on “DNA: CODE FLESH (Part One) By Alan Dale”

Wow thanks,,,
hope you can check out the new YA version or the full novel, but God I appreciate this!

Ain’t it cool when the author comments on your stuff?!
Until the new YA version has it’s own review, I’ll post the link here ~
AMAZON – http://www.amazon.com/Flesh-Code-Novella-Educations-ebook/dp/B00BMZOKN0/ref=sr_1_1?s=digital-text&ie=UTF8&qid=1362153450&sr=1-1&keywords=flesh+code
GOODREADS – http://www.goodreads.com/book/show/17455240-flesh-code?utm_medium=email&utm_source=book_recommendation